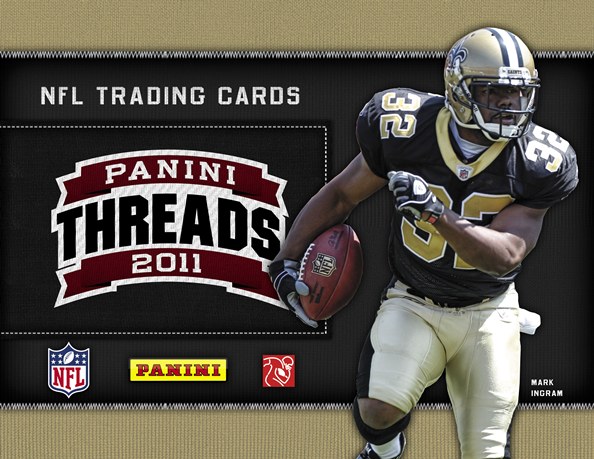 Panini Threads Football will celebrate its sixth season as a stand-alone brand when the 2011 edition arrives in late August. In that time, the late-summer blockbuster clearly has come into its own thanks to a captivating content mix that will only get better this season.

Panini Threads Football will celebrate its sixth season as a stand-alone brand when the 2011 edition arrives in late August. In that time, the late-summer blockbuster clearly has come into its own thanks to a captivating content mix that will only get better this season.

Sporting a few new wrinkles and the same potent presentation of memorabilia and autographs from the NFL’s top rookies and veterans, 2011 Panini Threads Football, like NFL training camps in most years, will once again play a pivotal role in getting collectors fully prepared for the regular season.

The newest installment of Threads, due out August 17, will deliver four autograph or memorabilia cards (with at least one autograph guaranteed), 24 Rookie Cards and an additional 13 inserts or parallels per box. Among that lineup will be Threads staples collectors have come to expect (such as Rookie Class autographed letters and Pro Gridiron Kings) as well as a few new wrinkles (such as Rookie Class Gold autographed letters).

“Personally, I think there’s a lot to be excited about in 2011 Threads,” says Panini America NFL Brand Manager Carlos Torrez. “But the two things that come immediately to mind are the Rookie Class Gold autographed letters that we’re introducing for the first time and the Pro Gridiron Kings Framed and Autograph parallels. The Rookie Class Gold autos are a unique twist on an established concept and will be among the most sought after singles in 2011 Threads; the Pro Gridiron Kings, with their proud lineage dating back to the early 2000s, tend to speak for themselves.”

Other highlights of 2011 Panini Threads Football include:

“When collectors hear the term ‘2011 Panini Threads Football,’ I want them to continue thinking that this product is as much a part of getting them ready for the NFL season as training camp,” Torrez notes. “It comes out right before the season and, like its name suggests, is loaded with NFL threads in the form of captivating game-worn memorabilia from veteran NFL stars and a healthy dose of event-worn memorabilia from the top 2011 rookies who attended the 2011 NFL PLAYERS Rookie Premiere.”

Enjoy this exclusive sneak peek at 2011 Panini Threads Football and stay tuned to The Knight’s Lance for all the latest coverage on Panini America’s riveting 2011 NFL trading card lineup.