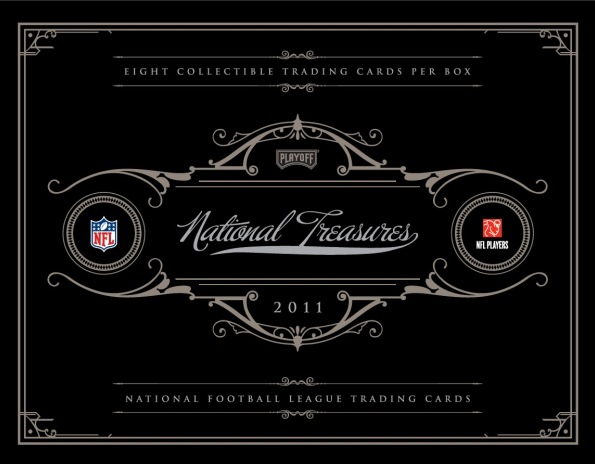 The term "March Madness" will take on a decided football feel this year with the release of 2011 National Treasures Football, the ultimate high-end NFL trading card set that releases March 21 equipped with more history, more collectibility and more "wow" factor than ever before.

The term “March Madness” will take on a decided football feel this year with the release of 2011 National Treasures Football, the ultimate high-end NFL trading card set that releases March 21 equipped with more history, more collectibility and more “wow” factor than ever before.

Oh, and 2011 National Treasures also will deliver the longest trading card in history, a unique 36-cards-in-one booklet creation that features autographed jumbo jersey pieces from every player who attended the 2011 NFL PLAYERS Rookie Premiere. When the card is unfolded, it will measure almost 12 feet long.

Simply, you’ve got to see it to believe it — and we’ll provide the world exclusive first look at it right here on The Knight’s Lance when the time is right. Until then, though, we can share everything else about 2011 National Treasures Football. Trust us, it’s quite a lot.

Eight-card boxes of the super-premium juggernaut will include three autograph cards and three memorabilia cards, and will stay true to its legacy of seamlessly melding the most-collectible rookies, current superstars and legends in a 336-card base set that incorporates 150 current players, 50 Legends, 100 Rookie Signatures and 36 Rookie Signature Materials — all numbered to 99 or less.

We’ve provided an extensive sneak peek at the product below. Take some quality time to soak it all in and stay tuned to The Knight’s Lance for additional updates.