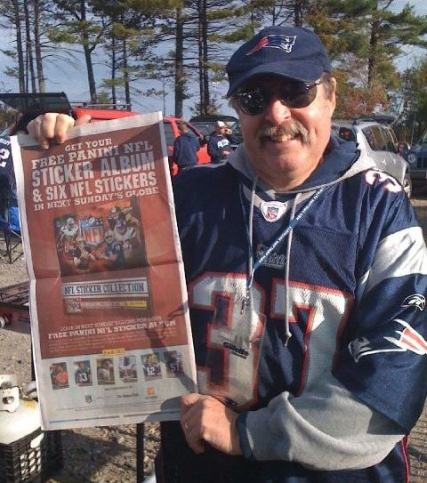 It's one thing to have the launch of Panini America's official NFL Sticker & Album Collection announced in the middle of Times Square for everyone to see.

It’s one thing to have the launch of Panini America‘s official NFL Sticker & Album Collection announced in the middle of Times Square for everyone to see.

It’s something else altogether grass-rootsy and different — yet perhaps every bit as effective — to have almost 600,000 albums and more than 1.5 million sheets of stickers (covering both the NFL and NHL collections) distributed absolutely free inside market-leading newspapers in Massachusetts and Montreal.

“Collecting and trading stickers is the basis of the global Panini brand,” says Panini America CEO Mark Warsop. “We were very excited to launch our first officially licensed NFL sticker collection earlier this fall and we hope that sticker collecting will become a favorite pastime of sports fans and families across the U.S. and all of North America as well.”

In addition to grabbing some face time earlier this season in Manhattan’s most visible stretch of real estate, the NFL Collection also received a significant boost in the Boston area with a large-scale sampling program in The Boston Globe that included the distribution of sticker albums and three consecutive Sunday editions worth of stickers.

That promotion, which received extensive support with advertising in The Boston Globe, online and on sports radio stations in the market, also features a “Golden Sticker Sheet” promotion that will culminate with one young collector winning a school appearance from New England Patriots receiver Julian Edelman.

Just as the Globe promotion is winding down, the puck is dropping on a similar promotion for Panini America’s official NHL Sticker & Album Collection with The Montreal Gazette. It began in last Saturday’s paper with the inclusion of more than 130,000 albums. That will be followed by the insertion of more than 275,000 sticker sheets — including limited-edition stickers of star rookies Taylor Hall of the Edmonton Oilers and Tyler Seguin of the Boston Bruins that are available nowhere else — during the next three weeks.

While countless consumers will no doubt be buying NFL and NHL sticker packets as stocking stuffers, 50 winners in Montreal of a Gazette online trivia contest will receive completed NHL sticker albums just in time for the holidays.

“After the success of our campaign to introduce the first officially licensed NFL sticker collecting with The Boston Globe, we saw an opportunity to expand our efforts to the NHL,” Warsop says. “The Montreal Gazette has proved a tremendous channel to deliver our sticker albums to the hands of Canadian collectors, and we are excited to partner with the Gazette on what we hope will be a successful promotion for both the newspaper and the sticker collection.”