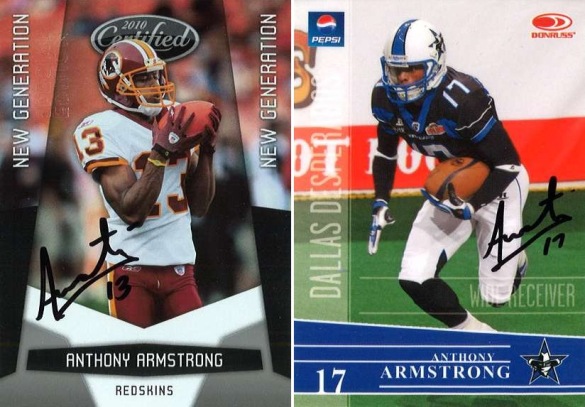 Texas native Anthony Armstrong ran a rather circuitous route to the NFL before making a huge splash during his breakout rookie season with the Washington Redskins in 2010.

Texas native Anthony Armstrong ran a rather circuitous route to the NFL before making a huge splash during his breakout rookie season with the Washington Redskins in 2010.

The speedy Armstrong spent much of his formative football years indoors — with both the Indoor Football League and the Arena Football League — and then graduated to the practice squads of the Miami Dolphins and Redskins, respectively.

But when he finally earned a spot on the active roster in D.C., his fast feet and soft hands were perfectly suited for FedEx Field, where Armstrong kept delivering one big play after another. He finished his first season in the NFL with 44 receptions for 871 yards and three touchdowns. He averaged a staggering 19.8 yards per catch as a rookie, third-best in the league behind only DeSean Jackson and Mike Wallace.

In February, Armstrong was going long again, this time on a plane flying home to Dallas, where he connected with Andrew Tolentino, Beckett Media assistant editor and one of Armstrong’s classmates at Newman Smith High School in Carrollton, Texas. Armstrong drew double coverage in Dallas — from Tolentino and Panini America’s Tracy Hackler — on a special video (below) during which the Redskins’ star caught, for the first time, his first NFL Rookie Card from 2010 Certified Football.

While filming the video, Armstrong was nice enough to sign copies of the card for Beckett Media and Panini America to give away. You can find out how to win Beckett’s prized Armstrong card here. To be eligible to win the one he autographed for Panini America, simply tell us in a comment to this post what you think of Armstrong’s breakout season and what you think of his box-busting debut, which you can see in its entirety below.