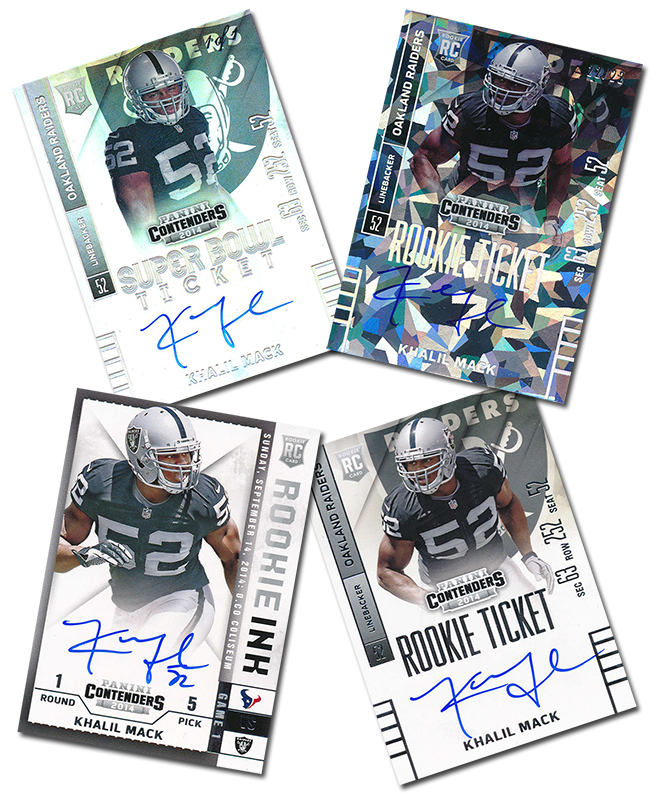 Chicago Bears linebacker Khalil Mack is both passionate and persistent in his pursuit of opposing quarterbacks. Those traits have helped Mack become one of the game’s best defensive players while recording 53 sacks since beginning his career in 2014. Clearly, the Panini America Acquisitions, Product Development and Customer Service teams have been paying attention. For more than four years, they’ve been just as passionate and persistent in their pursuit of Mack himself.

Late last week, more than 48 months of dogged determination finally paid off when Mack returned his autographed cards from 2014 Contenders Football, a product that released in January of 2015 when Mack was with the Oakland Raiders and had just four sacks on his resume. But he displayed enough flashes of brilliance that rookie season as to cause serious demand for his best Rookie Cards — especially those included in 2014 Contenders Football as redemptions.

That demand has only intensified in the seasons since as Mack’s disruptive and freakish style of play solidified him as a bona fide superstar. The trade that sent him to the Bears last season only raised his profile with fans and collectors — and placed more scrutiny on the fact that his best Rookie Cards from 2014 were still unsigned.

Panini America officials never once lost sight of the goal, which was to get those cards signed by Mack and into the hands of collectors by just about any means necessary. Even as months turned into years and new rookie classes entered the league, company officials kept at least one eye on the Mack situation, working with agents, player reps and the NFLPA to complete the Mack mission.

“Some redemption situations are more challenging and more trying than others and this was certainly one of those,” said Elizabeth Galaviz, Panini America’s Football License Acquisitions Manager. “But we never stopped working to get these cards back. We owe that to collectors and customers. It’s a mindset we take into every redemption situation. Some just take on a higher degree of difficulty. We’re thankful to check this one off the list.”