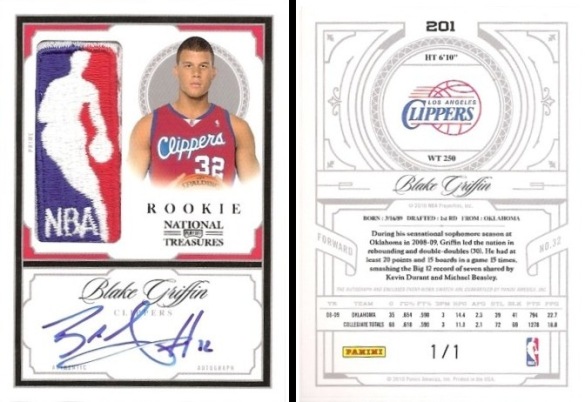 Much like the man whose very likeness it features, the 2009-10 National Treasures Blake Griffin basketball card that surfaced on the secondary market recently seems to specialize in dropping jaws and creating international buzz.

Much like the man whose very likeness it features, a certain 2009-10 National Treasures Blake Griffin basketball card that surfaced on the secondary market recently seems to specialize in dropping jaws while creating international buzz.

Also like the larger-than-life man himself, the card is a true one-of-a-kind masterpiece that simply can’t be over-hyped.

But if you think you’re sticker-shocked by the card’s current $32,032.32 asking price, just imagine how Ben Ecklar, Mike Payne, David Porter and John Mata must feel, as the Panini America team members who helped create the card from scratch last year for inclusion in 2009-10 National Treasures Basketball.

Officially, the card goes by the name “2009-10 National Treasures Rookies Black #201 Blake Griffin JSY AU.” Lately, it’s gone by names like “Wow!” or “Holy, Cow!” or “You’re Not Going to Believe This.” By any name, though, it is exceptional.

“I think that’s a lot of money in anyone’s world,” says Payne, a Basketball Brand Manager. “But, you never know who just might come around and click ‘Buy it Now.’ Then the seller looks like a genius, and a rich genius at that. If he can get that price for the card, good for him. If not, at least people are talking about it. And that’s never bad.

“But let’s just say that $32,000 wasn’t a figure that crossed my mind as a possible sales price when we produced this card last year.”

Color Mata — the graphic designer whose clean, subtly powerful design graces the card that has become the talk of the entire collecting universe — equally blown away.

“I thought that card would be worth a lot, but with Griffin being hurt last year, he and his cards were placed on the back burner, so to speak,” Mata notes. “When I first saw that card surface on eBay, I quickly posted it to my Facebook page. It is by far the most expensive thing I have ever designed.”

Ultimately, it might be the most expensive trading card anyone’s ever designed. But regardless what the card ultimately sells for, its place in the pantheon of the modern era’s most singularly significant sports cards is securely set. And that’s a point not lost on anyone inside Panini America corporate headquarters.

Least of all Porter, the Basketball Brand Manager who’s witnessed many a mind-blowing transaction in his more than 20 years in the industry. Still, he’s never seen anything quite like this.

“I’m cheering for any collector/dealer/speculator that takes our product to the secondary market,” Porter says. “True, the seller has set a fairly high bar, and I’m certainly curious to see what the collectors ultimately have to say about this particular Griffin card. But with the past behaviors and trends in the basketball market, five figures was not out of the question.

“We have seen his National Treasures Rookie Card numbered out of 99 already quadruple in value this season to around $3,000, and it wouldn’t surprise me to see the value climb even higher as Blake continues to garner more accomplishments and attention. It’s quite possible that when the 2010-11 NBA season comes to a close, Blake could be in the top 10 in both scoring and rebounding, an amazing accomplishment for a rookie.”

Topped only, perhaps, by the amazing performance of one of Griffin’s rookie-year trading cards.