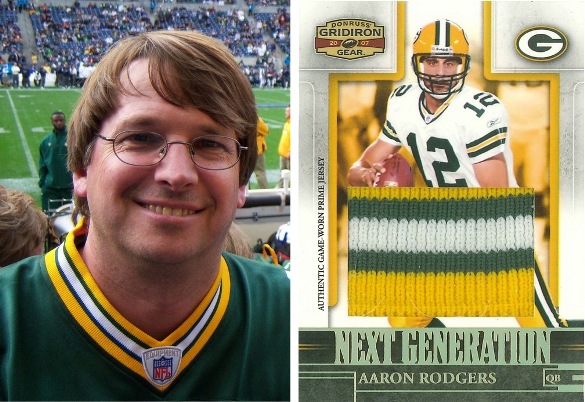 You'll have to forgive longtime collector Robert Sobon if he's still a little giddy these days. Watching your favorite quarterback -- who hails from your own backyard -- earn Super Bowl MVP honors while winning a championship for your favorite team tends to leave you feeling flighty for quite some time.

You’ll have to forgive longtime collector Robert Sobon if he’s still a little giddy these days. Watching your favorite quarterback — who hails from your own backyard — earn Super Bowl MVP honors while winning a championship for your favorite team tends to leave you feeling flighty for quite some time.

Let’s face it, Sobon could’ve made the Lambeau Leap from all the way in NorCal following the Green Bay Packers‘ scintillating victory over the Pittsburgh Steelers in last Sunday’s Super Bowl XLV.

Somehow, though, Sobon found time this week to gather his collective collecting thoughts — and a ton of sweet card images — on his relentless pursuit of the Green Bay Packers, a green-and-gold amalgamation of greatness that undoubtedly just took a huge jump up in value.

It all started after the 2005 NFL Draft, when Aaron Rodgers, California standout quarterback and Northern California native started to drop down the draft board, skipped by the team I had followed for years, the San Francisco 49ers. It was time to focus my collecting efforts on a new team: The Green Bay Packers.

At first it was just a quest to pick up Rodgers Rookie Cards, then memorabilia cards and autographs; and then it evolved into to picking up Rodgers and Packers Rookies Cards from every new release. From there, my collection expanded to other players, with a focus on Greg Jennings, A.J. Hawk, Donald Driver, James Jones, Ryan Grant, Jordy Nelson, Jermichael Finley, Clay Matthews and many others.

Searching eBay, breaking boxes, trading and engaging in group box breaks on Trading Card Central all added to the collection. Thousands of cards later, my Packers collection is continuing to grow with each year. Recent additions include a 2010 Gridiron Gear Aaron Rodgers autograph patch card numbered to 15 and a 2010 Classics Significant Signatures Ryan Grant autograph numbered to only 5.

Some of my favorites cards have always been from the brands of Panini America: Limited, Contenders, Classics, Gridiron Gear, Playoff Absolute and National Treasures. From the 2005 Playoff Contenders Rodgers SP Rookie Ticket’s clean styling to the multi-colored patches of Playoff Absolute like the Nelson patch autograph to the dramatic images of Limited and National Treasures like the Hawk and Finley autographs to the Monday Night Heroes from Classics like Jennings and Ryan Grant, each card is a treasured part of my collection.

BONUS: Speaking of treasured parts of Sobon’s collection, he’s offered to part with one of them: A BCCG 10 2005 Rookies & Stars Longevity Aaron Rodgers. To be eligible to win this card, please comment on Sobon’s collection here on The Knight’s Lance or follow him on Twitter.

Sobon will select a winner of this sweet Rodgers card next week.