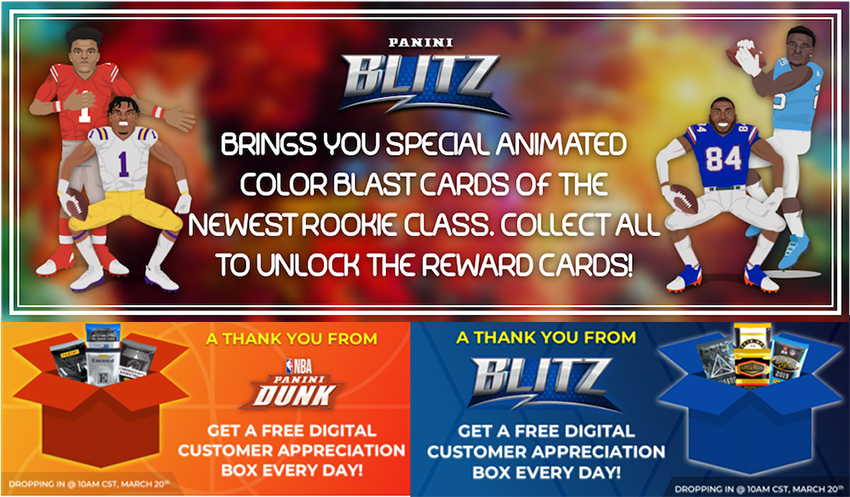 Animated Color Blast Emoji cards of some of last night’s top picks from the first round of the 2021 NFL Draft were revealed in real-time last night and are available now in the NFL Blitz Digital Trading Card App. More will be unveiled during tonight’s second and third rounds.

Collect all of the animated draft versions to earn the corresponding NFL Jersey Transition cards, where the newest rookies change from college unis to their NFL digs. Collect all 24 and earn an extremely limited Trevor Lawrence Award Card. Players from rounds two and three will not be revealed in real-time but will be inserted into digital packs the next day.

Prizm Football FOTL Time!
Last week, it was the NBA Dunk Digital Trading Card App; this week, it’s Blitz. Arguably the most popular Panini America brand — Prizm — dropped in Blitz for a special FOTL release earlier today. The last few FOTL drops have sold out in just a few hours so head to Blitz now. 2020 Prizm Football 1st Off The Line digital packs will be available in limited quantities before the official Prizm Football release in the coming days. Each FOTL Prizm pack includes a FOTL-exclusive digital card limited to either 10, three or one.

Thank You!
It’s been a great NBA season so far and we can’t wait to head into the 2021 Playoffs in the next few weeks. To say “Thank You!” for your continued support, head into the NBA Dunk app now to claim your free box.