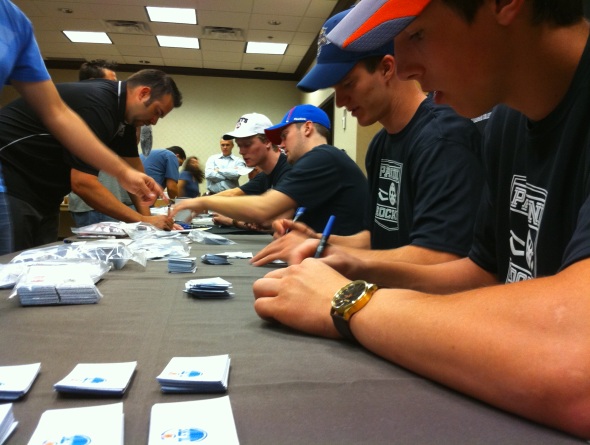 You are truly a legend #12, in every sense of the word. Thank you for all of the memories. @TomBrady
#GOAT #TB12 #ThankYouTom #whodoyoucollect

Truly grateful on this day. Thank you 🙏🏻❤️

TORONTO, Ontario -- Reason No. 6,347 to love the annual hockey-card extravaganza known as the NHLPA Rookie Showcase? Stories like this right here:

TORONTO, Ontario — Reason No. 6,347 to love the annual hockey-card extravaganza known as the NHLPA Rookie Showcase? Stories like this right here:

Ryan Strome, the fifth overall pick of the New York Islanders in the 2011 NHL Entry Draft, is busy signing a healthy batch of the Pen Pals duals that he shares with new superstar teammate John Tavares. Strome pauses briefly to snap a picture of one of the cards with his smart phone camera and continues signing.

Minutes later, Strome is notified of an incoming text, which he reads with a chuckle. Turns out he texted the Pen Pals pic to Tavares, whose one-sentence reply was priceless: “Why are you on top?”

Indeed, Day One at the 2011 NHLPA Rookie Showcase was absolutely brimming with quality stories, quality signatures and quality time spent with 26 of the top rookie prospects in the NHL. The youngsters arrived early and in good spirits, ready to sign the patches and cards that will soon become some of the most collected artifacts in the sport.

The highlights were plentiful and included, among other things, an extremely cooperative No. 1 overall pick Ryan Nugent-Hopkins (who likely signed more than any other player in the Panini America studio) to the completion of the first quad Pen Pals card, featuring Zack Kassian, Greg Nemisz, Ryan Ellis and Adam Henrique.

And you can see many of the Day One highlights in the video and gallery that follow. While today was reserved primarily for autograph acquisition, tomorrow will be focused on photography and interviews and will unfold on the ice and in studio at Toronto’s MasterCard Centre. We’ll have complete coverage of Day Two tomorrow.

Until then, enjoy the sights and sounds from an extremely productive Day One at the 2011 NHLPA Rookie Showcase.

And now, to the pictures: