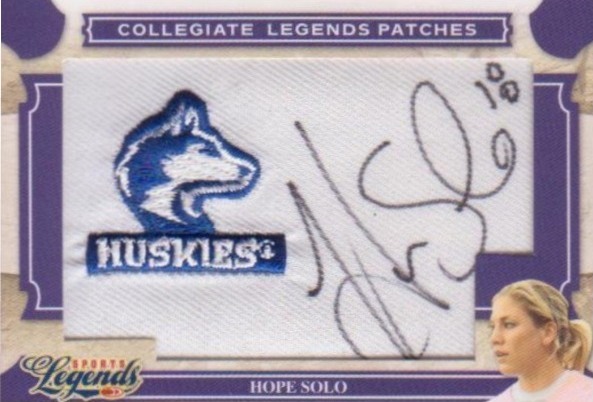 American soccer sweethearts Hope Solo and Abby Wambach are about to lead the United States women’s national soccer team into the 2011 FIFA Women’s World Cup final against Japan looking to claim the country’s third World Cup crown and first since 1999.

But regardless of what happens today in Germany, it’s safe to say that the stars of the U.S. team have already been winners on the sports collectibles pitch.

The first autographed trading cards produced of both Solo (in 2008 Donruss Sports Legends) and Wambach (in 2004 Donruss Leather & Lumber) have been huge draws on the secondary market in recent weeks as the U.S. team has continued to advance in the sport’s most prestigious tournament.

Copies of Solo’s autographed Collegiate Patches card from 2008 Donruss Sports Legends – paying homage to her days at the University of Washington — have been selling routinely for $50. Meanwhile, Wambach’s autographed Fans of the Game cards from 2004 Donruss Leather & Lumber (documenting her status as a bona fide Boston Red Sox rooter) have sold for more than $60 on the secondary market recently. For the record, those cards are currently valued at $50 by sports collectibles pricing authority Beckett Media.

“The Women’s team on the whole doesn’t have much in terms of cards,” says Brian Fleischer, a Beckett Media Senior Price Guide Editor who wrote a piece earlier this week on the surging collectibility of the U.S. women’s national team. “Solo and Wambach have been the strongest sellers in the past couple of weeks, and with a U.S. victory on Sunday, I think their cards will remain hot throughout the summer.”

Although Solo and Wambach are the latest American soccer stars with prominent Panini America trading cards, they aren’t alone. The legendary Brandi Chastain, whose 1999 Cup-winning goal and subsequent striptease celebration made her a national hero, appeared in the 2004 Donruss Elite Baseball Fans of the Game insert.

Today, autographed copies of that card are valued at $50. But even that could change with Sunday’s outcome.

“Surprisingly, there’s not much action right now on Chastain’s cards,” Fleischer notes. “But with a U.S. victory this weekend, it’s likely that collectors will go back and revisit her cards. She was the hero of the 1999 Women’s World Cup, after all.”