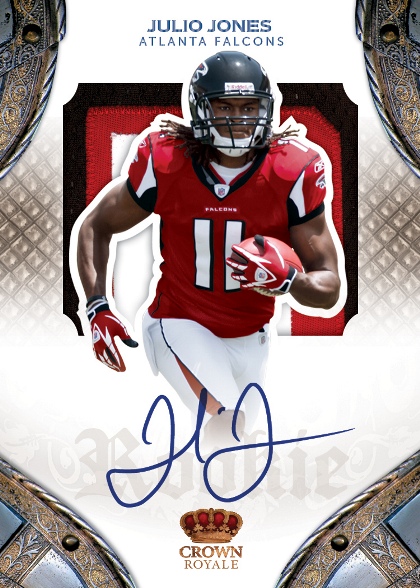 After a slow start in the polls, the world premiere sneak peek at 2011 Crown Royale Football made a stirring comeback early Saturday and, at the time of this posting, sits at No. 3 on the list. So, what can collectors expect from the second edition of the reimagined die-cut deity?

As one of the top three vote-getters in our Knight’s Lance Readers Choice Weekend poll, this story is being brought to you by . . . well . . . you. Stay tuned throughout the weekend for the additional content that you voted for, including your top two choices: More first looks at 2010-11 National Treasures Basketball and a gallery of some of our redemption prizes for the 2011 National Sports Collectors Convention.

After a slow start in the polls, the world premiere sneak peek at 2011 Crown Royale Football made a stirring comeback early Saturday and, at the time of this posting, sits at No. 3 on the list. So, what can collectors expect from the second edition of the reimagined die-cut deity?

Next to Rick Reilly, my all-time favorite writer ever is famed “Canterbury Tales” poet Geoffrey Chaucer. What can that possibly have to do with 2011 Crown Royale Football? Well, nothing except this: There’s a certain Chaucerian quality to the product’s aesthetic that wins me over every time.

But the 2011 version — a hobby-only blockbuster due out October 5 — is about so much more than just a uniquely pretty facade.

“The Rookie Silhouettes design that debuted in Crown Royale Football last year really helped re-launch the brand with a huge bang,” said Ben Ecklar, Panini America’s Director of Product Development. “When the 2010 product season ended, those cards stood tall as some of the most striking of the entire year – not just in football, but across all sports. This year we’ve managed to significantly improve on what many collectors thought was pretty close to perfection.

“Last year, Rookie Silhouettes were inserts in football. This year they will be the Rookie Cards of all 36 NFL PLAYERS Rookie Premiere rookies, numbered to 299 or less. In addition, they will all be signed on-card. These developments simply can’t be oversold as it relates to this product and its importance in 2011.

“We understand that a hit-per-pack product like Crown Royale must deliver value at both the pack and box levels, and the on-card autograph and prime-memorabilia content we’ve crammed into this product will be a huge part of this product delivering in a big, big way this season.”

Enjoy the following 2011 Crown Royale Football preview gallery and stay tuned to The Knight’s Lance for all product updates.