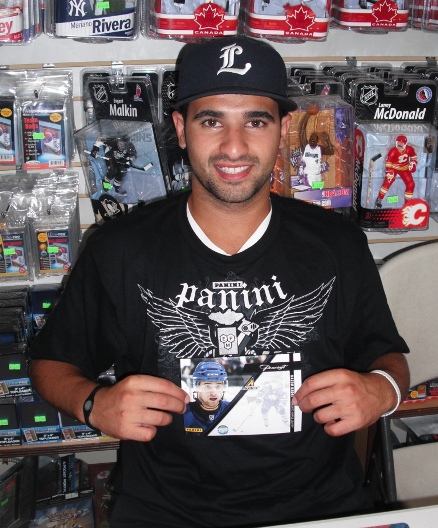 Joel Silverman, a 26 year-old avid NHL trading card collector from Thornhill, Ontario, turned one lucky pack of Panini NHL trading cards into one fantastic grand prize: The chance for him, his friends and family to spend the day with Toronto Maple Leafs Center Nazem Kadri.

“I would like to congratulate Joel and 401 Games, Toys and Sportscards for being the lucky winners of the 2010-11 Panini NHL Player of the Day hobby shop promotion,” said Jason Howarth VP of Marketing for Panini America. “We relish the opportunity to bring our loyal customers up close and personal with their favorite players and creating unforgettable memories.  We look forward to continuing the Panini Player of the Day tradition, when the 12th annual Panini NFL Player of the Day promotion begins at more than 500 hobby shops in September.”

The fun –filled afternoon began when Kadri, accompanied by TV crews from Leafs TV and CTV-Toronto, showed up on Silverman’s doorstep to congratulate the sweepstakes winner.  The a rabid Leafs fan immediately challenged Kadri to a game of EA SPORTS NHL ’11.  With nearly 30 friends and relatives in attendance, Kadri, showed the fans that he’s got game off the ice too, earning a 5-2 win over Silverman.

From there, Silverman showed the young Leafs star his 1,600-card Eric Lindros Collection which he built since 1994-95.  He had slowed down collecting a bit over the last few years, but when Panini brought back Eric Lindros cards in products such as Certified, Limited and the Score Recollection Buyback RC Auto’s /5 he was right back in the mix.

After signing autographs, posing for photos and answering questions about being an NHL player for all the party guests, it was time for Kadri to show Silverman and three of his friends what it’s like to be an NHL player.  The group hopped in a stretch limousine for a 45-minute ride to Silverman’s favorite hobby shop — 401 Toys, Games and Sportscards in Toronto.

The limo arrived at the hobby shops where a sea of Leafs fans and card collectors awaited their chance to participate in the special day.  For the next hour nearly 200 collectors posed for photos, shook hands and received an exclusive Panini collectible photo signed by Kadri.

During the signing session, Silverman did a bit of shopping of his own, using part of his $250 Panini shopping spree for a box of Panini Luxury Suite NHL cards.  Rather than break the box alone, Silverman sat alongside Kadri and had the Leafs star break his first pack of cards since he collected as a kid.  The haul included Leafs great Johnny Bower Auto/50, Keith Primeau Gold/10 and a Vinnie Lecavalier Stick & Number/50.

Silverman is one of the 100,000 NHL card collectors who participated in the 2010-11 Panini NHL Player of the Day promotion at more than 250 hobby shops across the U.S. and Canada during March and April.  He is among the thousands who earned prizes, but the only one to “spend a day” with an NHL player.

Joel’s journey began when he uncovered the designated Panini NHL Player of the Day from a pack of cards he purchased at the hobby shop.  He was then selected as the grand prize winner from all the winners in his local shop.  Upon being entered into the national sweepstakes along with 250 other entrants, he was randomly selected as the grand prize winner.