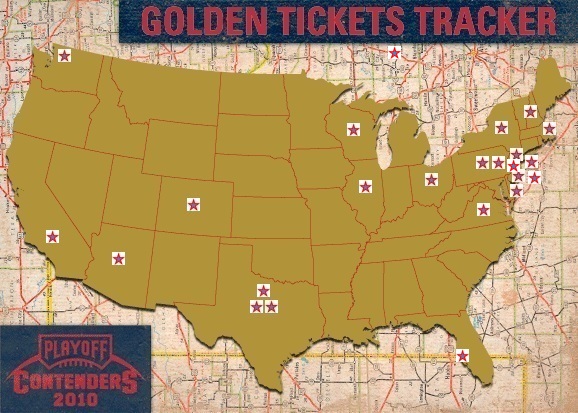 It’s no secret by now that the pioneering Golden Ticket redemption treasures buried randomly inside packs of 2010 Playoff Contenders Football have created a frenzied collecting buzz across America since they first hit the market more than two weeks ago.

It’s no secret by now that the pioneering Golden Ticket redemption treasures buried randomly inside packs of 2010 Playoff Contenders Football have created a frenzied collecting buzz across America since they first hit the market more than two weeks ago.

Every card pulled is nothing short of an industry-wide event, complete with the staggering auction prices to prove it. The Golden Ticket for Aaron Rodgers sold for more than $2,200 while cards of Peyton Manning, Roger Staubach and Mark Sanchez have each eclipsed the $1,200 barrier.

In an effort to keep everyone up to date on this exciting cross-country gold-dig, we’ve created the following list of all known Golden Tickets that have been pulled to date, including sales information when possible. We’ll update this list periodically as more Golden Tickets surface. The most recent pulls have been, in a word, huge.

We profiled the two lucky collectors who pulled the Sam Bradford and John Elway Golden Tickets yesterday; in the hours that followed we were notified that the C.J. Spiller had surfaced in Canada (and had already been sold), the Emmitt Smith had surfaced on the East Coast and the Terry Bradshaw had surfaced all the way over in Tokyo.