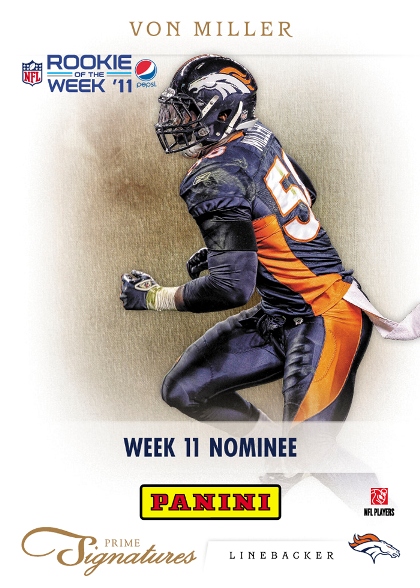 Voting begins for the Week 12 Pepsi NFL Rookie of the Week . . .

Vote for the NFL Pepsi Rookie of the Week each week during the NFL regular season. Then share the image of the Pepsi Rookie of the Week Nominee you voted for on your Facebook page. In addition, post the image on the Panini America Facebook page (after you “like” us if you haven’t already) or simply comment with the nominee you voted for. On Twitter, use the hashtag #PepsiROW and mention @PaniniAmerica to Tweet out the card image of the rookie you voted for. For doing those things, you’ll be eligible to win prizes throughout the season. Oh, and there just might be a special payoff at the end of the season.

Now for your Pepsi NFL Rookie of the Week nominees for Week 11:

9 Replies to “And the Nominees Are . . . Voting Begins for the Week 11 Pepsi NFL Rookie of the Week”