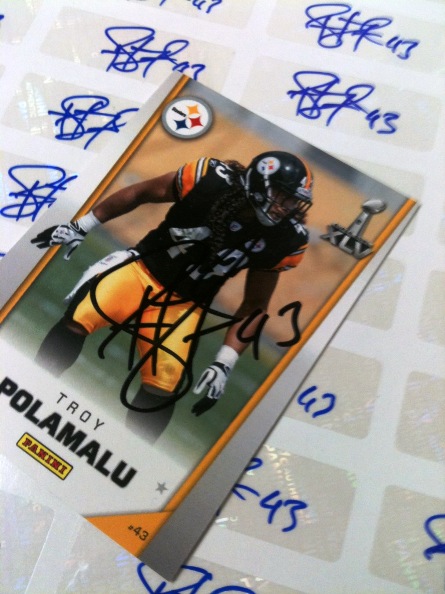 For those counting at home, it's been more than eight years since Pittsburgh Steelers defensive dynamo Troy Polamalu last appeared on a certified autograph trading card. But he's never once signed on-card for a manufacturer -- until now.

For those counting at home, it’s been more than eight years since Pittsburgh Steelers defensive dynamo Troy Polamalu last appeared on a certified autograph trading card. But he’s never once signed on-card for a manufacturer — until now.

Today, Panini America announced that it has secured autographs from Polamalu for insertion across several of its 2011 NFL trading card brands, including a small number of on-card autographs. For a player as popular as Polamalu on a team as collected as the Steelers, the announcement ranks as huge news in the sports collectibles industry.

During Polamalu’s rookie season of 2003, Panini America became the first (and remains the only) trading card manufacturer to include signatures from the wildly maned wunderkind in a select number of rookie-themed products. Today, those autographed Rookie Cards from 2003 Rookies & Stars and 2003 Playoff Contenders carry an average value of $450 according to Beckett Media.

All these years later, Panini America is making Polamalu history once again.

Following years of attempting to reach additional autograph agreements with Polamalu (and not receiving as much as a counter offer from Polamalu or his representatives), Panini America steadfastly went after the six-time Pro Bowler and 2010 Defensive Player of the Year for 2011.

“Oh, I was shocked,” said Joe White, Panini America’s NFL Acquisition Manager. “But due to his immense popularity and the demands on his time, it was difficult for Polamalu to find the time to sign. But he carved out some time for us this summer — and it probably didn’t hurt our case that we were the only company to sign him to an autograph deal during his rookie season.”

Polamalu’s live autographs are sure to inject new levels of collectibility and interest to most of Panini America’s remaining 2011 NFL products, including 2011 Absolute Memorabilia, 2011 Crown Royale and 2011 Certified.

“This is awesome news for us and we’re obviously thrilled to have him back in the fold,” White said. “But it’s even better news for the countless passionate Polamalu collectors who’ve been waiting almost 10 years for new autographed trading cards. Make no mistake about it, this is huge news in collecting circles.”

Panini America made similar waves earlier this year by announcing that it had secured Charles Woodson autographs for the first time since his rookie season of 1998.