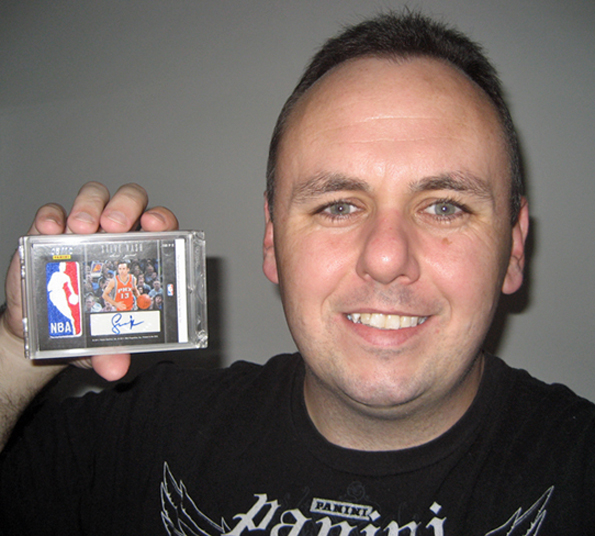 As a moderator for OzCardTrader, Australia's leading online card collecting forum, Matthew Horne has his finger on the pulse of what's hot down under. Of course, he also has his fingers all over a pretty sick Steve Nash personal collection, too.

As a moderator for OzCardTrader, Australia’s leading online card collecting forum, Matthew Horne has his finger on the pulse of what’s hot down under. Of course, he also has his fingers all over a pretty sick Steve Nash personal collection, too.
Horne’s been collecting now for more than 15 years, no small feat on a continent that presents a vast checklist of challenges that might seem foreign to most U.S.-based collectors. To be sure, Horne represents his home country well in the following interview, which also includes a sweet gallery of his favorite Panini America Nash cards as well as a few of his fellow countrymen.

How did you get started collecting and how did you settle on Steve Nash?
“I started collecting basketball cards in 1992 at about the time the Shaq craze swept across the world. Prior to this, basketball cards were almost unheard of in Australia.
“I stopped collecting in 1999 but started up again in 2005 when Andrew Bogut was chosen as the No. 1 Draft Pick. I was on the lookout for a player to collect and after watching a few NBA games on TV, I was really impressed with Steve Nash. His play was unselfish, he could throw some unbelievable passes and he seemed like the ultimate team player. I couldn’t think of a better player to collect.”
Is there anything else that you collect in terms of other players or sports?
“I collect cards of Ryan Anderson from the Orlando Magic, who I have followed since his rookie year. It’s great seeing him play so well this season. I also collect cards of the Australian players in the NBA and some of the Australian sports teams that I follow in both Australian Football League and National Rugby League.”
Can you detail some of the challenges and rewards of collecting sports cards in Australia?
“We have a very active card collecting community here in Australia and I help run a website called Ozcardtrader.com.au along with its owner, Graham Williams. Graham has put in a lot of his own time and money to keep the site running and he is a big part of our community being so successful. We have thousands of passionate collectors — not only from Australia but from across the world — and we actively encourage people to help out others with their collecting goals. It’s great to see so many amazing cards located here in Australia and some of our members have player collections that are among the best in the world.
“A couple of the challenges we face in collecting cards here in Australia is that we have only one or two card shops in the whole country and we have to rely heavily on distributors, card stores, eBay members located in the U.S., which becomes expensive in terms of freight costs but also the time it takes to receive the products. There are also some people that simply refuse to ship internationally which is another challenge we face.”
Do you have any great anecdotes regarding your collection in terms of acquisitions, near-misses, pulls, etc.?
“There are so many great stories I have experienced being part of Ozcardtrader and the local collecting community. Stories of collectors giving away free cards to other members and even a situation where one of our members took a long a list of cards with him to the National Sports Collectors Convention to try to help find cards for our members.
“One story that does stand out is that we have a great relationship with one of our U.S.-based members (Matt, AKA shawnbradleyfan) who helps Australian collectors by being the go-between with U.S.-based sellers. He has done this for a few years now and is always willing to help secure cards for our collections. A few of our members who had been the recipients of Matt’s help got together and raised the money to purchase Matt’s most-wanted card and sent it to him as a thank you for all of the assistance he had given over the years. It was a really great story of collectors helping each other out.
“On a personal level, I have been fortunate to strike up a great friendship with another Steve Nash collector based in the U.S. (David, AKA thenashcollector) who has helped me with my collection throughout the years. David has the best Nash collection I have ever seen and, despite never having met each other, we are often in contact trying to help each other out with our collections.”
Can you talk about the favorite cards in your collection and perhaps about ones you still want/need?
“One of my favorite cards is the 2010-11 Elite Black Box Passing the Torch dual autographed card of Nash and Kevin Johnson numbered to 10. I really love the design of this card and it is the one card I really wanted when Black Box was released. A close second is the Nash Gold Records Patch card out of 2010-11 Gold Standard. I was also lucky enough to pick up the 14kt gold version of this card as well.
“I am always on the look out for any nice Nash patch/auto cards and one day I would love to visit the National and bust a case on National Treasures. I can dream, can’t I?
“In closing, I’d like to thank the team at Panini America for not only making great products, but for being passionate about the hobby and willing to help out communities like Ozcardtrader. By supporting our local community, it helps us build a great environment for people to collect cards and make some good friends along the way.”
Our pleasure, Matthew. Thanks for sharing your story. Now, let’s see some of your sweetest cards . . .