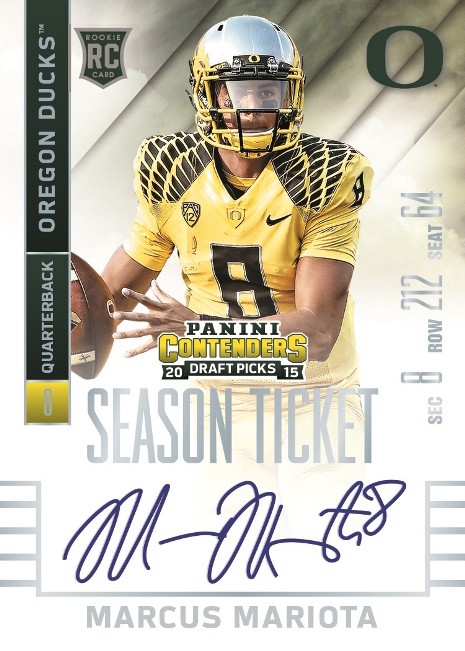 HOT off the presses…one of the first boxes Panini Prizm Football. #whodoyoucollect #prizm

Panini America, the world’s largest sports and entertainment collectibles company, announced today that it has signed former Oregon Ducks quarterback and 2014 Heisman Trophy winner Marcus Mariota to a trading card and autograph agreement for the 2015 season that will include Mariota’s first licensed NFL and collegiate trading cards and autographed trading cards. As part of the agreement, Mariota will also appear on Panini trading card packaging. In December 2014, Panini announced an exclusive multi-year trading card agreement with the University of Oregon that begins on April 1, 2015.

Mariota rewrote the offensive record book at the University of Oregon during a decorated three-year career and is projected to be a first-round pick in the upcoming 2015 NFL Draft. His first licensed trading cards will arrive in the April release of Panini America’s 2015 Contenders Draft Picks Football product; Mariota also will be featured extensively in the company’s complete roster of 2015 NFL/NFLPA licensed football card sets.

“Marcus is one of the most exciting players in the 2015 NFL Draft Class and his accomplishments at the University of Oregon make him one of the most successful quarterbacks in college football history,” said Panini America CEO Mark Warsop. “This agreement is huge for us not only for what his presence will mean for our NFL product line, but also for what it will mean for our first college products.”

During his final season at Oregon, Mariota became the first player in school history – and the first Hawaiian-born player – to win the Heisman Trophy. The 2015 Rose Bowl MVP finished his career at the University of Oregon with more wins (36) than any other quarterback in history and also earned the Davey O’Brien Award, the Walter Camp Award, the Maxwell Award and AP Player of the Year honors.

All Panini America NFL player memorabilia and trading card agreements are done in conjunction with NFL Players Inc., the licensing and marketing subsidiary of the NFL Players Association (NFLPA).

Panini America is the only company in the world that manufactures licensed trading cards and stickers for the NBA, NFL, NFL PLAYERS, NHL, NHLPA, MLBPA and FIFA World Cup. The company also has exclusive relationships with USA Baseball, USA Basketball and U.S. Soccer.  In addition Panini also has relationships with the Naismith Memorial Basketball Hall of Fame, The Pro Football Hall of Fame and the National Baseball Hall of Fame and owns exclusive entertainment licenses with Disney, Dragon Ball Z, and more than 600 global licenses with other sports and entertainment properties.