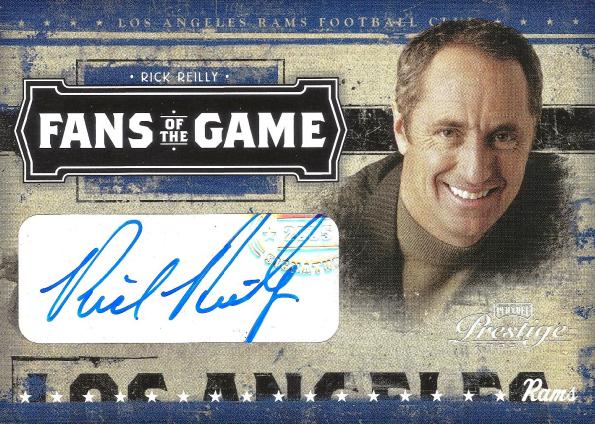 In the interest of full disclosure, know this: I am an unabashed, unapologetic, geek-level Rick Reilly fan. His is one of the four faces proudly carved into my Man Crush Mount Rushmore, right alongside John Elway's, Tim Tebow's and Eminem's.

In the interest of full disclosure, know this: I am an unabashed, unapologetic, geek-level Rick Reilly fan. His is one of the four faces proudly carved into my Man Crush Mount Rushmore, right alongside John Elway’s, Tim Tebow’s and Eminem’s.

When it comes to the pantheon of great American sportswriters, they get no greater than Reilly, a gifted scribe who can, in the same column, make you laugh, make you cry, make you think and — if you fancy yourself a sportswriter — make you feel woefully inadequate.

So, when the company then known as Donruss hatched the innovative idea of the Fans of the Game insert way back in 2004, Reilly was a guy I lobbied for heavily as a must-have inclusion. After a few months of filibustering on his behalf, I was granted the green light and promptly set out to strike an honest-to-goodness trading card deal with the man himself.

To no surprise, Reilly was a champ — gracious, approachable, willing and able, and all with his unique brand of X-Acto Knife wit and self-effacing sense of humor that makes (in my opinion, at least) virtually every column he’s ever written must-read material.

In the few months between the time he agreed to be in Fans of the Game and the time 2005 Prestige Football hit the market, I had switched jobs and was working for Beckett Media as a publisher. But I stayed in touch with Reilly throughout the process via email and kept him in the loop on the values of his regular card and the autographed version.

In fact, Reilly unknowingly provided one of my all-time favorite professional memories when he mentioned my name in the “Life of Reilly” column he wrote about his Fans of the Game card in the Aug. 22, 2005 issue of Sports Illustrated.

Why does any of this matter today? Good question. There is a point to my incessant yammering and it is this: Reilly unknowingly provided yet another great memory for me just last week, right there on the Lucas Oil Stadium sideline during Super Bowl XLVI Media Day. I finally had the chance to meet the man in person.

So I introduced myself, shook his hand and we shared a few chuckles about his Rookie Card. Then I turned my video camera on and, well, this happened . . .