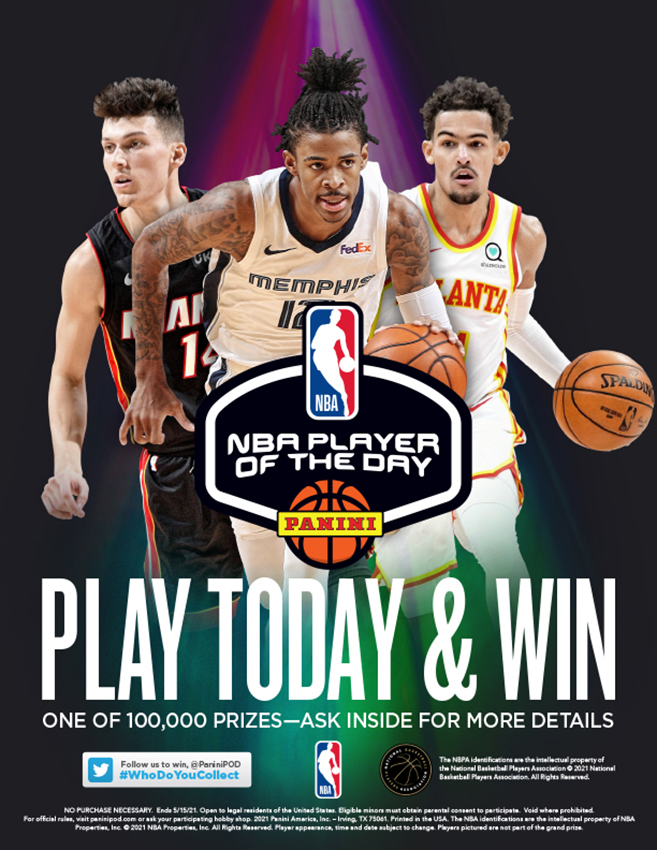 As the 2020-21 NBA season hits the homestretch, a record 550 hobby shops across the country will be rewarding collectors for purchasing Panini America NBA trading cards for the sixth consecutive season by hosting the Panini NBA Player of the Day Hobby Shop Promotion. Late last week, participating shops received their promotional kits and, by now, most of them have started to run the 30-day promotion. A complete list of  participating dealers can be found here.

In addition to awarding more than 150,000 prizes including exclusive Panini NBA Player of the Day promo packs, masks, T-shirts, NBA sticker albums and Ultra Pro protective supplies, each shop also will award one lucky winner an exclusive Panini NBA Player of the Day autograph card and enter them into the national sweepstakes to win a prize package including Panini swag, boxes of Panini NBA cards, a shopping spree at their local card shop and the chance for a personal meeting with an NBA player.

This year, 100 new shops are participating in the promotion, bringing the total to a record 550 hobby shops. Collectors win prizes just for pulling that day’s designated Player of the Day from packs of Panini America NBA trading cards.

Every time a collector purchases a pack of Panini NBA trading cards at a participating hobby shop, they are one step closer to meeting an NBA player. Over the past five years, lucky collectors have won the opportunity to meet Knicks rookie R.J. Barrett, 76ers rookie Matisse Thybulle, Pacers rookie Aaron Holiday, Lakers legend Shaquille O’Neal and Timberwolves All-Star Karl-Anthony Towns.  Highlights of these events are available here.

How it Works
The centerpiece of the promotion is a poster featuring Panini NBA card images of one player from each of the 30 NBA teams. Each day, a different player on the poster is designated as the “Panini NBA Player of the Day” while Panini spokesmen Ja Morant and Anthony Edwards are “Wild Cards” for the duration of the promotion. Every time a collector purchases a pack of officially licensed Panini NBA trading cards and pulls the player of the day or a Wild Card, they win a prize. Each week, stores will conduct a drawing from the daily winners to award a weekly prize.

The exclusive autograph cards are slabbed in a protective case by BGS with each shop receiving one card to award to their grand prize winner. The checklist boasts an impressive lineup of rookies, All-Stars, legends and young stars such as: Coby White, Collin Sexton, Obi Toppin, Domantas Sabonis, Donte DiVincenzo, Tyrese Haliburton, Deni Avdija, Larry Johnson, Latrell Sprewell, Danny Manning and many more.

Collectors also will get to enjoy the promotion and win autograph cards and other promotional items through the Panini POD Twitter and Facebook pages.  Additional details are available at www.PaniniPOD.com.