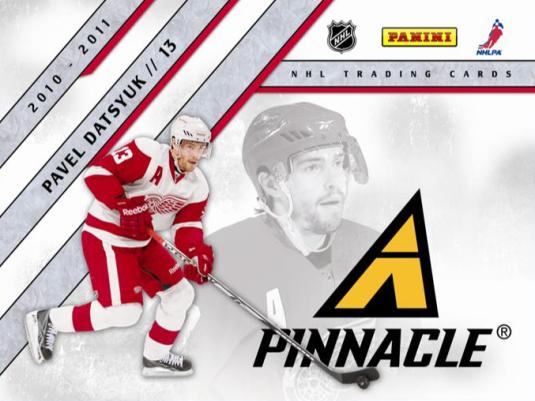 Three months from now, during a time when most young hipsters are smack dab in the middle of spring break, Panini America will be giving hockey purists the real reason to party: The serendipitous return of Pinnacle Hockey after more than 12 seasons away.

Three months from now, at a time when most young hipsters are smack dab in the middle of spring break, Panini America will be giving hockey purists the real reason to party with the serendipitous return of Pinnacle Hockey after 12 seasons away.

The March 16 release of 2010-11 Pinnacle Hockey will mark the celebrated reemergence to the market of one of the sport’s most revered brands, complete with many of those true-to-its-roots touches that made the franchise so popular in the first place, including Museum Collection parallels and Artist’s Proofs.

“The whole team has really bought into what we’re trying to do with Pinnacle, and I think it will show on every card,” says Al Muir, Panini America’s Hockey Brand Manager. “From the photography to the reinvention of the card back — seriously, you’ll want to check these out — this will be a base set that any hockey fan will want to spend hours with. On top of that, we’re cramming four autograph and/or memorabilia hits into every box. Then there’s the Museum Collection, the Artist’s Proofs, the Tough Times ’70s insert … every box should be a blast to bust. We think this is going to be the start of something really big.”

In all there are 50 Ice Breakers RCs on the checklist, including 20 that are autographed.

Enjoy the following preview images from the 2010-11 Pinnacle Hockey and stay tuned to The Knight’s Lance for more information on the product.