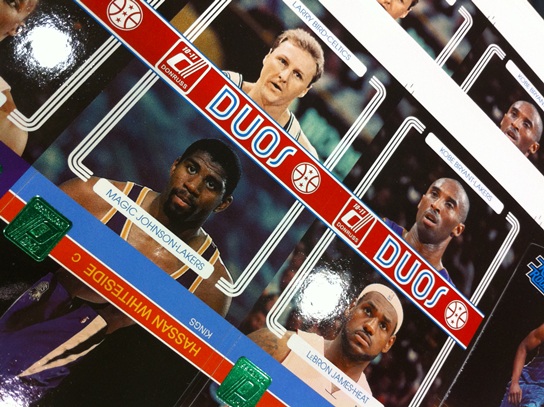 When you struggle with attention deficit disorder like I do, a routine trip to Panini America's production facility can turn into . . . hey, look at those Tim Tebow parallels . . .

When you struggle with attention deficit disorder like I do, a routine trip to Panini America‘s production facility can turn into . . . Hey, look at those Tim Tebow parallels . . .

Where was I? Oh, yeah . . . a routine trip to the production facility can turn into an all-day affair filled with a sensational, senses-attacking feast. In one corner, cards are being die-cut and prepped for . . . Wow! Check out the foil variations on Donruss Basketball . . .

See, there I go again, letting my ADD ge the better of . . . Holy Cow! Look how mesmerizing those uncut sheets of Limited Hockey are!

Simply, everywhere you look at our production facility (especially these days with so many products in various stages of completion), there’s something that seems substantial enough to make me want to scream “Stop the presses!” just so I could gawk. But I know if I did that none of our products would ever get out the door.

This week’s trip treated me to up-close glimpses of 2010 Panini Plates & Patches and 2010 Contenders Football, 2010-11 Donruss and 2010-11 Timeless Treasures Basketball, 2010-11 Limited Hockey and 2010 Panini Americana Century Collection. It certainly was a scintillating scene . . . and a darn fine way to wile away the first half of a work day.

Some quick thoughts on what you’re about to see:

In any event, I hope you enjoy the gallery. Trust me when I tell you that it was as much fun to bring to you as it is for you to . . . Hey, check out those Century Collection stamp cards being assembled . . .

One Reply to “Panini Peekapalooza: Chronicling Another Splendid Stop at the Production Facility”