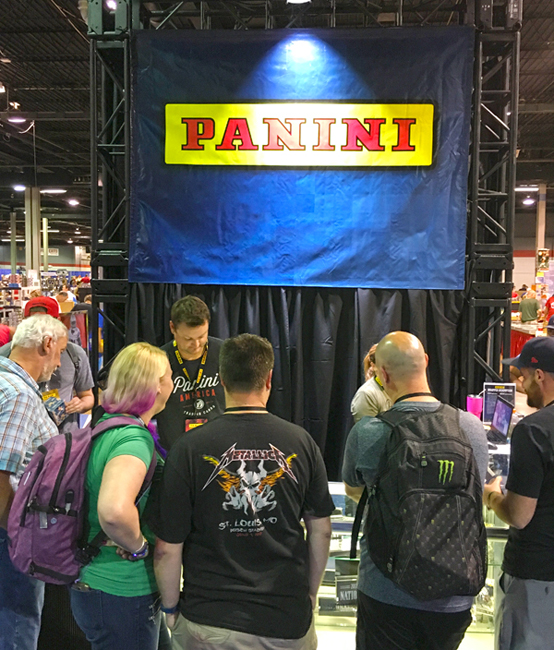 ROSEMONT, Ill. – The Chicago area once again became the center of the sports card and memorabilia universe on Wednesday with the opening of the 38th National Sports Collectors Convention -- and Panini America took its place at the heart of it all.

ROSEMONT, Ill. – The Chicago area once again became the center of the sports card and memorabilia universe on Wednesday with the opening of the 38th National Sports Collectors Convention — and Panini America took its place at the heart of it all.

Panini’s dynamic set is traditionally a can’t-miss place to visit at the National. This year is no different with larger-than-life photos of today’s top NBA, NFL, MLBPA and NASCAR stars covering the corner displays and an eye-catching collection of Panini Authentic game-used items on display. Of course, Panini America’s portion of the blue-carpeted Corporate Pavilion will also be a hub of nearly non-stop activities through Sunday. Wednesday’s sneak peek served as the appetizer for a full National menu this weekend.

It all starts with the always-popular wrapper redemption program, which had collectors lined up down the aisle almost as soon as the doors opened. Cracking boxes of select Panini America products means the coveted shiny silver packs come out in stacks that were frequently ripped into moments later by collectors looking for National-exclusive promo cards that include stellar variations, memorabilia and autographs.

Some of the case-breaking world’s most notable names will drop by to broadcast live breaks from the Panini America booth all week long. Ultimate Box Breaks and Soccer Breakers FC led things off by busting some 2017 Certified Football and 2017 Revolution Soccer for their faithful customers who couldn’t make it to the National.

The Live Redemption Trade-Up program is back at it again this year. Wednesday’s steady line proved collectors were ready to swap out their outstanding redemptions in order to walk away with cards of greater value in hand.

There’s plenty of buzz about Saturday’s Panini VIP party featuring baseball’s Hit King, Pete Rose, boxing legend Thomas “Hitman” Hearns and NBA standouts Glen Rice and Latrell Sprewell (with more special guests to be announced Thursday and Friday). Collectors loaded up on Panini America products to secure their spot at the show-stopping event that has National attendees and collectors around the country talking every year. More guests and other surprises are still to come before the big night.

As you map out your plans for the next few days, don’t forget about the Panini Free Kids Case Breaks happening Thursday, Friday and Saturday. Youngsters will have a chance to grab some of Panini’s best cards simply by jumping in line at 10:30 each morning to claim a piece of the fun.

Jump on Panini America’s Twitter, Facebook and Instagram through the 2017 National for photos, videos and other fun from Chicago throughout the week. You can check out a complete gallery of Wednesday night’s action in the gallery that follows.

3 Replies to “Setting the Tone: Panini America Kicks Off 2017 National with Excitement Aplenty”