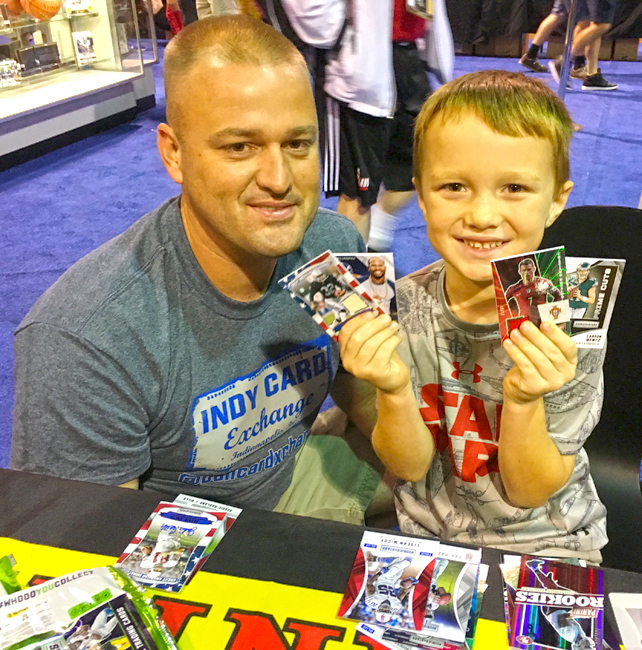 When the dust settled after Ultimate Box Breaks’ Bryan Gavin tore through cases of 2016-17 Select Basketball and 2017 Prestige Football, the only thing more abundant than big hits were the number of smiles on young faces.

“I like doing this,” said 10-year-old Mercedes of Virginia after scoring a handful of Boston Celtics cards in the Select break. “You always get something.”

Gavin — with the help of young assistants including 3-year-old Jacoby Nichols — dished out numbered parallels, jersey cards and autographs, while also explaining to the kids and their parents the key parts of box breaks.

“I love teaching you how group breaks work,” Gavin said before assuring everyone would pick up a few cards or a prize of some type during the break. “You will not walk away empty handed.”

Gavin played the crowd well (including a brief breather for everyone to show off their fidget spinners) as he and his helpers ripped through Select packs and sorted out the shiny treasures that included a 1-of-1 patch card featuring the Houston Rockets’ Chinanu Onuaku, a sharp Kyrie Irving die-cut auto and a stunning Karl-Anthony Towns autograph.

Nichols proved to be the scene-stealer as Gavin sat him on the table where he quietly called out team names for the final box as his dad, Anthony, snapped photos. The Nichols family is attending its first NSCC.

“That’s why we came here,” Anthony Nichols said with a smile after his son’s case break debut. “That was awesome.”

There are five more chances to join in the Kids Case Break excitement this weekend, with two breaks scheduled for Friday and three on Saturday – including one on the National Main Stage inside the Case Breakers Pavilion.

Youngsters can qualify by visiting the Panini America booth to sign up each morning beginning at 10:30 a.m., but lines formed early on Thursday for the highly anticipated breaks which have become a National tradition offered by Panini America.

The kids did all right beyond the case breaks throughout Thursday as young collectors tore their way through, and showed off their hits from, boxes of Rookies & Stars Football, Stars & Stripes Baseball and Prestige Basketball. The youth movement also extended into Box Wars where not one, but two, kids scored Panini Black Boxes for winning their respective contests.

Follow all of the case break, Box War and Silver Pack redemption pack action all weekend on Panini’s Twitter and Instagram, and right here on The Knight’s Lance. Check out a must-see gallery of Thursday’s highlights from the Panini America booth below.