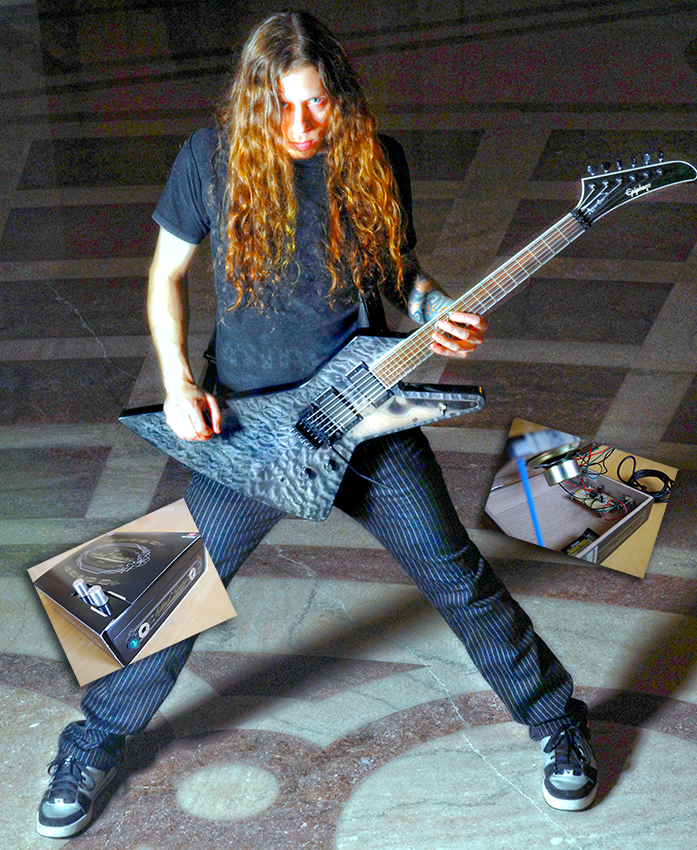 Henderson, you see, happens to be a thriller of a thrasher on just about anything with six strings. As one of the lead musicians for the pioneering Guitar Hero videogame franchise, Henderson has earned a sweetly-strummed reputation as one of the preeminent metal guitarists in the world, a status no doubt accentuated by his riff-roaring exploits for rock bands such as Drist and Hellbillys.

Make no mistake about it: The hard-rocking California kid-at-heart also happens to be a hardcore collector, too; a lanky, long-haired legend who’s as comfortable ripping wax as he is shredding his own signature-model Epiphone Apparition guitar.

So given the organic convergence of cool that took place between Henderson’s music, Cogburn’s music box and Panini America’s National Treasures trademark packaging, it seemed borderline criminal not to do something cool with it.

So here’s what we did:

Henderson’s song choice? Fittingly, the National Anthem. The resulting riff, which you’ll enjoy in the video that follows, is pure Hendrixian brilliance and nothing less than the sweetest music ever heard coming from a box of football cards.

“The National Anthem was played in one take with a [barely audible] speech by a legendary American softly supporting the track in the background,” Henderson notes. “I was wary to not turn the song into a gymnastic display of guitar skill as most singers are guilty of — I’m looking at you Christina Aguilera! — but wanted to add a few firecrackers so as not to put the viewers to sleep.

“Regarding the amp itself: Wow! I was completely blown away at the low mid-range response. I had a really nice sweet spot with the Wah cocked back to heel position and got it singing nicely. It’s not often that someone can engineer a decent sounding amp out of wood, let alone a box of National Treasures. My only question? ‘Can he please make one for me?’ “

Marcus, I’m sure we can work something out, especially if the music you make with it is as stunningly splendid as this . . .

And here’s the NT box break Henderson did with his brother, Scott. Do yourself a favor and just jump to the 7:00 mark. You won’t be sorry . . .