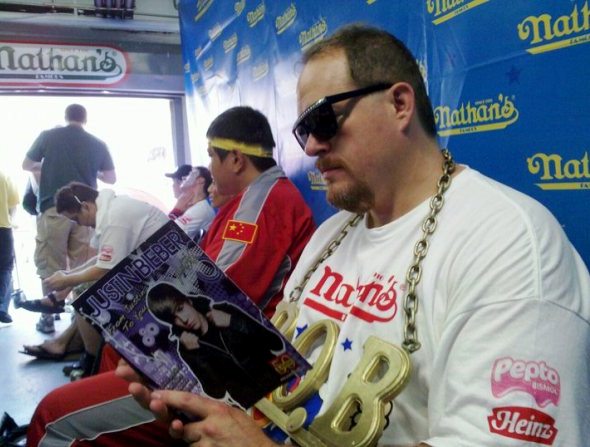 Bob Shoudt walks alone – although he rarely ever eats alone – as perhaps the only man on the planet both willing and able to devour unfathomable quantities of products made by Panini and into paninis.

Bob Shoudt walks alone – although he rarely ever eats alone – as perhaps the only man on the planet both willing and able to devour unfathomable quantities of products made by Panini and into paninis.

Indeed, the Philly-bred phenom known in competitive eating circles as “Notorious B.O.B.” possesses a voracious, seemingly insatiable appetite for collectibles and calories – and he’s got the trophy case to prove it.

Shoudt, who once consumed more than 23 pounds of salmon chowder in just six minutes, is fresh off a fourth-place finish at Monday’s Nathan’s Famous International Hot Dog Eating Contest. He consumed 39 hot dogs in 10 minutes at competitive eating’s marquee event Monday, propelled to do so by, of all things, a pre-contest perusing of Panini America’s Justin Bieber Sticker Album.

“The Biebs’ is a highly successful individual,” Shoudt said during an exclusive interview with The Knight’s Lance earlier this week. “I was trying to go with some out-of-the-box thinking in looking for inspiration from sources the other eaters would not turn to.

“You see, most competitive eaters – prize eaters as we like to refer to ourselves as – do not appreciate the finer things in life.  I am the exception.  I know that The Biebs is not only commercially very successful, but also very successful with the female fans. Therefore, if I do not win at the table at least I will have a better chance to win away from the table.”

Rest assured, though, Shoudt is successful at the table more times than not. He’s currently ranked fourth in the world by Major League Eating and the International Federation of Competitive Eating, and he owns the world record of eating almost 35 beef brisket BBQ sandwiches in 10 minutes.

Which one have you been participating in longer: Competitive eating or collecting?
I’ve been eating competitively longer but only doing it professionally for 10 seasons. I’ve been collecting for about 39 years, since I was 5.

What’s your favorite food in a non-competitive setting?
Nachos. Nothing else comes close. A nice and big plate of nachos with cheese, meat, jalapeños, lettuce, tomatoes, guacamole and salsa.

Which sounds more appealing: A case of Panini America trading card product in 10 minutes or 25 panini sandwiches?
Assuming I could dunk the panini sandwiches in liquid prior to consuming, there is no way I’m taking the full 10 minutes to eat them. I would use the remaining four minutes to open the case of product. That is one thing I’ve never been able to do: Rush through trading card products. I actually look at the cards and stickers as I open them up. Impatient people want no part in splitting a case with me as it takes me hours.

But since I already get paid to eat food, the case of Panini trading product would win out every time. I would just have to ignore how good the trading product looks as I rip it open in 10 minutes.

How often do you discuss collecting cards with your fellow competitive eaters?
Most of the eaters are collectors themselves, so the topic comes up often. We talk about new products and exciting new things we have added to our collections. We talk about what celebrity functions we’ll be attending and who else is going to be there. Then we try to swap out stuff with each other. Just this weekend we were talking about the upcoming National and I think there will be at least four Nathan’s finalists attending the show.

If you could create the perfect Notorious B.O.B. Panini trading card, what kind of picture is on the front of it and what does the back say?
The front would be a pic of me rocking some new shades and my trademark B.O.B. bling. I would be holding up a first-place check made out to Notorious B.O.B. and in the background you could see Joey Chestnut with the look of defeat in his face as he realizes that I just schooled him again.

The back might have some of my stats, like 39 Krystal hamburgers in two minutes, 13.9 pounds of chili spaghetti in 10 minutes, 37.5 roast beef sandwiches in 10 minutes, and my record of the most food ever eaten both by weight and volume of 312 fluid ounces and 23.4 pounds of salmon chowder in six minutes. It would have some of my training techniques, like how I do 100 crunches a day – I prefer fun-sized Nestle Crunch bars — and how I like to stay fit by watching aerobics on TV and sometimes even in person.

Now if the card had to have all of my records, it would need to be oversized as I have a ton of them.

7 Replies to “The Hunger for Collecting: At the Table with Competitive Eating Star Notorious B.O.B.”