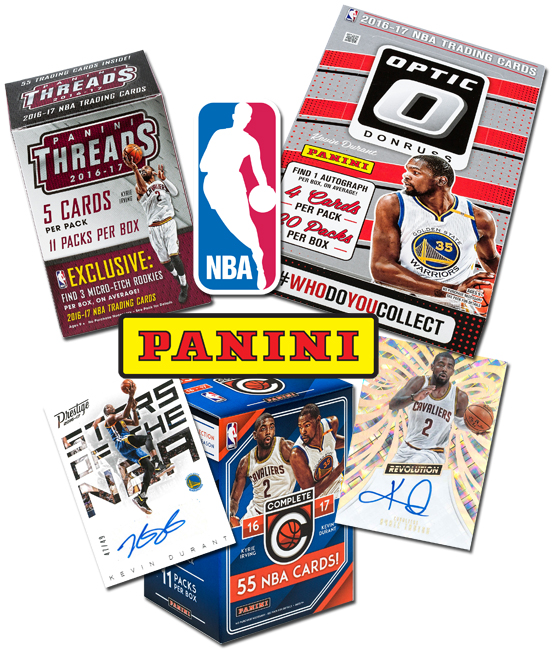 The National Basketball Association (NBA) and the Panini Group — the world’s largest sports and entertainment collectibles company — today announced a long-term, multiyear extension of its exclusive partnership, which began in 2009. Panini will remain the exclusive trading card and sticker partner for the NBA globally. The Panini Group’s U.S. subsidiary, Panini America, will continue to manage the partnership.

The National Basketball Association (NBA) and the Panini Group — the world’s largest sports and entertainment collectibles company — today announced a long-term, multiyear extension of its exclusive partnership, which began in 2009. Panini will remain the exclusive trading card and sticker partner for the NBA globally. The Panini Group’s U.S. subsidiary, Panini America, will continue to manage the partnership.

“We’re honored that the NBA has entrusted us to be its exclusive trading card manufacturer for the last seven years, and this extension is a pivotal part of our exciting future,” said Mark Warsop, CEO of Panini America. “The NBA is a vital, vibrant part of our company and we look forward to a long, prosperous future.”

Panini’s diverse array of NBA products, which includes mass retails brands such as NBA Hoops and Donruss, and super-premium products such as Flawless and National Treasures, is designed to attract new and existing fans and collectors, establishing a high-end, global marketplace for NBA trading cards and related products. This renewal bolsters Panini’s unparalleled position as the only company in the world to manufacture official trading cards and stickers for the NBA, NFL, NFLPA, MLBPA, NASCAR, FIFA World Cup and more than 300 colleges.

ABOUT THE NBA:
The NBA is a global sports and media business built around three professional sports leagues: the National Basketball Association, the Women’s National Basketball Association, and the NBA Development League.  The league has established a major international presence with games and programming in 215 countries and territories in 49 languages, and NBA merchandise for sale in more than 125,000 stores in 100 countries on 6 continents.  NBA rosters at the start of the 2015-16 season featured 100 international players from 37 countries and territories.  NBA Digital’s assets include NBA TV, NBA.com and the NBA App, which achieved record viewership and traffic during the 2015-16 season.  The NBA has created one of the largest social media communities in the world, with more than one billion likes and followers globally across all league, team, and player platforms.  Through NBA Cares, the league addresses important social issues by working with internationally recognized youth-serving organizations that support education, youth and family development, and health-related causes.

ABOUT PANINI:
The Panini Group, established more than 55 years ago in Modena, Italy, has subsidiaries throughout Europe, Latin America and the United States.  Panini is the world leader in officially licensed collectibles and is the most significant publisher of collectibles in the U.S., with exclusive licenses for the NFL, NFLPA, NBA, FIFA, College and licenses with NASCAR, MLBPA, NHL, NHLPA and Disney, and other key properties from many other licensors. Panini is also the exclusive trading card and sticker partner of the Naismith Memorial Basketball Hall of Fame, Pro Football Hall of Fame and Pop Warner Little Scholars, Inc. Panini has distribution channels in more than 130 countries and employs a staff of over 1,100. For more information visit us at www.paniniamerica.net, www.paninigroup.com or https://blog.paniniamerica.net/. You can also follow Panini America on social media platforms Facebook, Twitter, YouTube and Instagram.