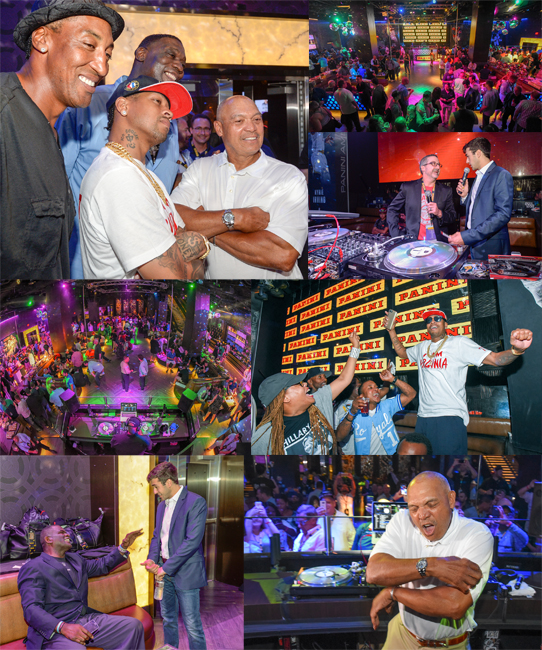 ROSEMONT, Ill. – From the swag and exclusive cards to the star athletes, few events in the hobby world compare to the annual Panini America National VIP Party. Saturday’s night exclusive get-together figures to uphold the tradition established by Panini in 2012 of staging an unforgettable night filled with surprises for collectors lucky enough to secure a ticket.

ROSEMONT, Ill. – From the swag and exclusive cards to the star athletes, few events in the hobby world compare to the annual Panini America National VIP Party. Saturday’s night exclusive get-together figures to uphold the tradition established by Panini in 2012 of staging an unforgettable night filled with surprises for collectors lucky enough to secure a ticket.

The bar has been raised once again with an epic lineup of current and former NBA and NFL standouts which includes Los Angeles Lakers rookie Lonzo Ball, football Hall of Famers Deion Sanders and LaDainian Tomlinson, as well as boxing legend Thomas “The Hitman” Hearns, baseball’s all-time hit king Pete Rose and more.

There’s still plenty of intrigue about what will happen tonight, but that’s part of what keeps VIP Party veteran Nelson Rodriguez coming back for more. Rodriguez, a collector from South Milwaukee, Wis., has been part of the hobby’s biggest night since its debut five years ago.

“I enjoy the atmosphere. It’s kind of like a brotherhood for all the people who started in 2012 when only 50 people were allowed. I think I was No. 46 out of the 50,” Rodriguez said with a laugh. “Every year is a ‘Can you top this?’ ”

Rodriguez said an “obvious” reason he attends year after year is the undeniably sought-after exclusive gold packs, but the chance to meet athletes up close is the memory maker for him.

“For me, the one that comes to mind is the first (party). We did not know anything until we actually got there. One of the invitees was Ivan Rodriguez. He’s Puerto Rican, I’m Puerto Rican. I remember being at the table as he’s walking in and I start speaking Spanish to him,” Rodriguez recalled.

On the other end of the spectrum is Minnesota native-turned-Texas resident Tim Nordskog. He will be attending his first Panini VIP Party later tonight.

“I don’t know what to expect because I have nothing to compare it to. I’ve seen some of the things written about it, but I don’t have any specific expectations outside of seeing the athletes . . . and to meet some other collectors,” Nordskog said. “It’s just going to be neat to see people ripping through all their silver packs and their gold packs, and see whatever athletes are going to be there. It’ll be cool to be a part of that and see everybody mingle.”

Whether you’ve “been-there-done-that” like Rodriguez or aspire to be a first-timer like Nordskog, Panini literally has your ticket to the industry’s party of the summer. Stop by the Panini America booth at 1:30 p.m. on Saturday for a 2017 Pantheon Football Box War that will put a VIP Party pass in the hand of the winner.

It’s an amazing opportunity to join the Panini America crew and fellow hobby enthusiasts for a night of fun. If you can’t be there, follow us on Facebook, Twitter and Instagram for highlight throughout the festivities.

For perspective, check out our recaps from past Panini VIP extravaganzas.

3 Replies to “VIP Views: A Veteran and Rookie Talk About Panini America’s Biggest Night of the Year”