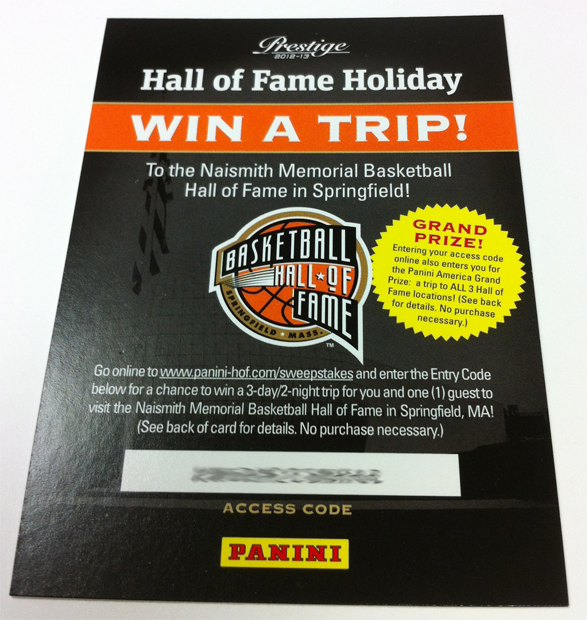 When the highly anticipated 2012-13 Prestige Basketball releases tomorrow, it will hit store shelves with more than just a tremendous design and 100 Rookie Cards. Each box will deliver more than three autographs, one memorabilia card and one bonus pack of five Kobe Anthology cards.

When the highly anticipated 2012-13 Prestige Basketball releases later today, it will hit store shelves with more than just a tremendous design, 100 Rookie Cards and a tantalizing selection of inserts. Indeed, each box will deliver more than three autographs, one memorabilia card and one bonus pack of five Kobe Anthology cards.

In fact, each and every pack produced for the product across both hobby and retail channels will include the chance for one lucky fan and a guest to win a dream trip to the Naismith Memorial Basketball Hall of Fame in Springfield, Mass.

Panini America’s season-long Hall of Fame promotion tips off in earnest today, and will follow with chances for similar dream excursions to the National Baseball Hall of Fame and Museum (in 2012 Cooperstown Baseball) and the Pro Football Hall of Fame (in 2012 Gridiron Football).

“One of our main objectives with every product we make is to bring fans and collectors as close as possible to the greatest athletes who’ve ever played the game,” said Jason Howarth, Panini America Vice President of Marketing. “Now, we’re taking that mission one step farther with this special Hall of Fame promotion. One lucky fan will win a free trip to the Hall of Fame – and the lasting memories that come with such an opportunity – just for opening packs of Panini America trading cards.”

All fans and collectors have to do to be eligible is enter into the special Hall of Fame Holiday Website the unique access code found on the Hall of Fame Holiday promo card inserted into every pack of the three aforementioned products. The best part? Everyone who enters the sweepstakes will also be entered into a drawing for the grand prize: A dream trip for two to all three Halls of Fame.

We’ll give you a second to let that sink in.